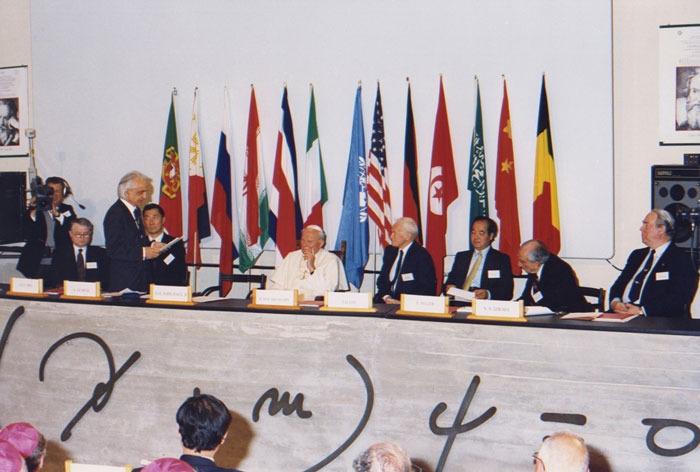 How does one adequately recognize the life of such a remarkable man as Pope Saint John Paul II, and address, in just a few minutes, his contribution to our world? Let me refer to three areas that are of particular, personal interest to me – science, politics and faith.

Science – The work of scientists and the importance of their contribution to the search for truth as a twin sister of the search of faith, was a priority for him all through his papacy. He gave real support to the Pontifical Academy of Sciences, an independent body within the Holy See whose first leader was Galileo Galilei. Pope John Paul II took an active interest in the Academy, updating its statutes and increasing the number of academicians. In 1979, in a speech at the Academy on the centenary of the birth of Albert Einstein, he requested the establishment of a committee of historians, theologians and scientists to examine again the case of Galileo in order to remove the distrust that this episode still generated and any obstacles that it created in the way of fruitful concord between science and faith. The committee reported in 1992 when Pope John Paul II made clear that the Church’s ruling had been in error and that Catholics were not hostile to science. In May 1993 he made a pastoral visit to Sicily and went to the Ettore Majorana Centre in Erice, where the World Federation of Scientists is based (photograph above) and again he made clear in what he said and did there that science was part of the search of the faithful. I was greatly honoured to receive a Prize for my work on the Science of Peace-Building at the Pontifical Academy in 2006 and when I returned to the Academy again in November 2009 for another meeting of the World Federation of Scientists, I well remember seeing a further remarkable evidence of the practical out-working of John Paul II’s attitude to science. At that time, we were able to visit a new exhibition of Galileo’s instruments and some of the original documents in which he excitedly recorded his first discoveries exactly 400 years previously. But what was so significant was that the exhibition was not held in a museum or a gallery, but in a church – the extraordinary Basilica of St. Mary of the Angels and the Martyrs, in Rome – another demonstration of John Paul II’s commitment to seeing faith and science as both being part of the search for truth. Earlier, in 1996 on the 60th Anniversary of the re-founding of the Pontifical Academy of Sciences he had taken another important step by saying that “new knowledge leads the theory of evolution to be no longer considered as a mere hypothesis” and emphasising that the work of researchers had taken evolutionary theory to the point where it now had to be recognized and addressed by theologians. And there was more. He had some very specific scientific concerns such as his anxiety about the consequences for the people of the world of a nuclear war, and he wrote to the World Federation of Scientists back in 1982, to encourage them in their work for the peaceful use of nuclear technology. John Paul II was committed to the church and academia cooperating and engaging respectfully with each other for the benefit of mankind. As a physician and psychiatrist for whom faith and science go together, I see John Paul II as both inspirational and transformational.

Politics – The second area of life commitment for me is politics and I find it difficult to think of any Christian Church leader who has had a more direct and personally courageous impact on global politics. Cardinal Karol Józef Wojtyła, (voy-TIH-wah) had been elected on the third day of the papal conclave in October 1978, as the first non-Italian pope since the 16th century and he went on to be not only the most travelled Pontiff, but one of the most travelled world leaders in history. However much more importantly he is recognized as helping to end Communist rule in his native Poland and eventually in all of Europe. From the moment when he kissed the ground at Warsaw Airport in 1979, during a visit where he gave encouragement to the formation of the Solidarity Union, he was key to the unlocking of the deep freeze of the Cold War. My wife, Joan, and I had been travelling in Poland in the summer of 1978 and so when he was elected in October of that year, we had a special appreciation of the great rejoicing and pride of the people there in their Polish Pope. Much later, when the Berlin Wall eventually came down in 1989, I remember standing with the German Liberal Leader, Count Otto Lambsdorff on the eastern, communist side of the Brandenburg Gate seeing the great gaps that had opened up in the wall, talking to liberals who had been under threat for so many years in the GDR, and marvelling at the extraordinary political changes which had been brought about, not by political parties, but by courageous people, and one of the most significant, courageous and effective was John Paul II.

Faith – Of course the driving force of his life was his faith, which was an ongoing engagement with others who were searchers, even where they came from other cultural backgrounds. So, it is no surprise that when, in 1962 at the Second Vatican Council, he met Brother Roger, the founder and leader of the ecumenical community at Taizé in France, they became firm friends. He was the young auxiliary Catholic Bishop of Krakow and Roger Schutz was the son of a Swiss Calvinist pastor, but they were both men of deep faith and that was the basis of a long-lasting relationship of great religious significance. Later, as Archbishop of Krakow, Monseigneur Wojtyla (voy-TIH-wah) visited Taizé twice, in 1964 and 1968. And after he became Pope in 1978, he received Brother Roger every year in private audience right up to his death. In one of his many journeys, John Paul II, visited Taizé, as Pope, in 1986 and he regularly met and encouraged groups of young people from Taizé when they came to Rome. In my own journey of faith, Taizé, has occupied a very special place and has had a hugely important influence in my life, so while I come from a different Reformed Christian tradition and diverge considerably from John Paul II theologically, that faith connection in Taizé is of deep personal and spiritual significance.

So, as I reflect on the centenary of the birth of Pope Saint John Paul II, that Taizé connection with its ecumenical commitment, the scientific links through the World Federation of Scientists and the Pontifical Academy of Sciences in Rome and my political appreciation as a liberal of what he achieved in bringing an end to communism in Europe, all leave me remembering the life, witness and leadership of Pope Saint John Paul II in faith, science, and politics, with profound gratitude and appreciation.