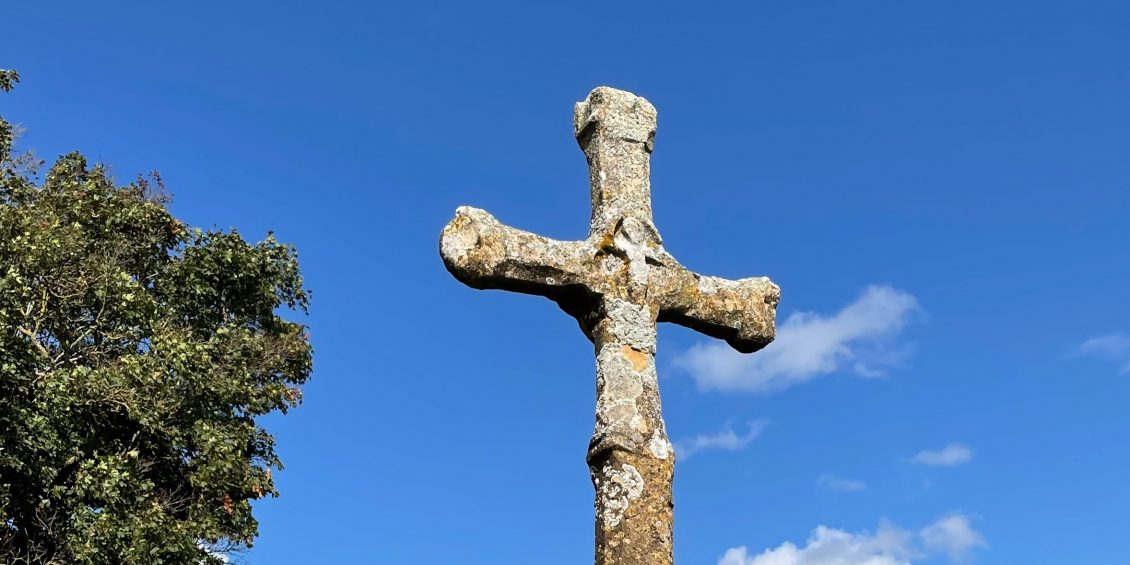 The book of Daniel, from which our Old Testament reading was taken today, is a very interesting one for us here in Fringford.   One of the stained-glass windows in the choir is a representation of the prophet Daniel, and our church is named after St Michael and All Angels.  The Archangel Michael is mentioned three times in the Hebrew Bible – all three times in the book of Daniel.   Michael is also mentioned in Jude and in the New Testament book of Revelation, from which we also read today, and he is referred to along with Gabriel in The Koran, the holy book of the followers of Mohammed.

As a Presbyterian I was used to the idea of respected Christians as a group being referred to as ‘saints’.  We read in older translations of some of the New Testament epistles, such as Corinthians and Philemon, of Christians being addressed ‘the saints’ – good and holy people.   However non-conformists never got involved in the canonization of individuals and tended not to name churches after saints.   However, the naming of this archangel as a saint – St Michael – is more puzzling still for me.  Michael is not a man at all.  He was regarded as a very special angel – the protector of the people of God, and the key cosmic challenger to the fallen angel, Lucifer – but he is not someone who lived, or lives, a holy life.  As an angel he inhabits the world of the unseen and he cannot not have the kinds of relationships that human beings have, face the same temptations. nor even face death.   In previous generations this world of the unseen was traditionally a source of fascination and fear and it is difficult to know quite what to make of it today.

Perhaps that is why most of us grew up more familiar with the stories from the first six chapters of the book of Daniel than with the second half of the book.   The book starts with Daniel and his three friends, Hananiah, Mishael and Azariah, taken off into Babylonian captivity, indeed we know his three friends better by their Babylonian names, Shadrach, Meshach and Abednego.  They risked their lives by refusing to eat non-kosher food but were all the more healthy for it.  The three friends got into much more trouble when they refused to worship an idol set up by the king, and were thrown into a burning fiery furnace, but God protected them from harm.  Later, and perhaps the best-known story of all, Daniel is thrown into the lions’ den because of his refusal to pray to the king instead of God, but God protects him from the lions.

Daniel is also much in demand for his ability to interpret dreams and mysteries for the kings, Nebuchadnezzar, Belshazzar, and Darius the Mede, and in the second six chapters of the book, we read more about Daniel’s own dreams and visions.  These are much less well known than the stories of the first half, not least because they are somewhat puzzling.   Today’s reading from chapter 7 seems to refer to the one who we might call, God the Father – the Ancient of Days.  The remarks about his white robe and white hair seem to make some sense to us, but what about the flames of fire which were his throne.  Perhaps the one described as ‘like a man’ or sometimes translated as ‘son of man’, who is presented to the Ancient of Days and given sovereignty, glory, and kingly power, seems like something we are more used to, but only if we think about it in terms of visions, dreams, and allusions to the Messiah for whom the Jews waited in hope.

Our New Testament reading was taken from Revelation – a book which has elements that are similar those of the book of Daniel.  The first three chapters appear to be relatively straightforward and refer to things we can grasp.   Although the context is somewhat dream-like with the references to seven candlesticks or lamps and seven stars, they are at least explained to us as referring to the seven spirits with messages to the seven churches in Asia Minor – Ephesus, Smyrna, Pergamum, Thyatira, Sardis, Philadelphia, and Laodicea.  We can also see how the messages sent to them speak not only to the seven church communities of that time, but also apply in various ways to Christian communities of today.  But as Revelation progresses, just like the book of Daniel, it becomes ever more strange and apocalyptic.  It is full of dream-like language and descriptions of strange and terrible things happening, as well as references to God and a man, sometimes referred to as ‘the son of man’, who we can see as being an allusion to Jesus Christ.  However, there is a profoundly mystical quality to the rest of the book, that leaves us puzzling as to what exactly it is really intended to convey to us beyond the sense of bad times coming and the faithful protection of God through them.

This quality of mystery or uncertainty takes us to our Gospel passage for today in John chapter 18 where Pilate is trying to understand this strange fellow, Jesus, who has been brought before him by the Jewish leaders with a demand that he be executed.   In the first place, while the punishment demanded is clear – execution – the charge against Jesus is not, and Pilate asks what are the accusations.  The Temple police had arrested him in Gethsemane and brought him to Annas and then to his son-in-law, Caiaphas who was High Priest at the time.  They wanted to be rid of him because he was a troublemaker and deeply offended their religious sensitivities.   Of course, they were supposedly awaiting the arrival of the Messiah, but this man didn’t fit their picture of what the Messiah ought to look like.

Some of them wanted a Messiah who would fit with their image of Michael – the archangel and great protector of the people of God.   In the words of the prophet Daniel, “At that moment Michael shall appear, Michael the great captain, who stands guard over your fellow-countrymen; and there will be a time of distress such as has never been since they became a nation till that moment.  But at that moment your people will be delivered.”  The Messiah would be a man that would be the deliverer of God’s people who were indeed living in a time of great distress under the heel of the Romans.  These people wanted a warrior Messiah who would defeat their Roman enemies, just as Judas Maccabeus had defeated the Seleucids and established an independent state for the Jewish people.   Jesus was not a warrior.  He pointed out to Pilate that his followers did not fight to prevent his arrest and as we known he actually told Peter to put away his sword and spoke not of conquest but of forgiveness.

Others wanted a Messiah who would confirm that their traditional Jewish understanding of God and how to worship him was the true way, unlike the pagans who surrounded them or even their Samaritan cousins.  But remember what happened when Jesus spoke with the woman of Samaria at the well.   She fully expected an argument about who should worship God, how and where, but Jesus told her that the old dependence on tradition and place was being superseded by worshipping ‘in spirit and in truth’.   He was proclaiming the end of the age, the old age, and the birth pangs of the new Kingdom of God.   She did not understand him, and even his disciples, whom he had taught and with whom he had lived and travelled throughout his ministry did not understand what he was about.   Over and over, he tried to explain his Gospel to them and time and again he is left frustrated that they do not understand.

The chief priests and leaders of the Jewish community may not have agreed about everything, but they were clear that they wanted rid of this troublemaker with his dissident religious views.   The Roman law would not permit them to execute him, so they would press the Roman Governor to do it.   Even coming into the Governor’s palace was a problem for them since this would leave them ritually unclean and unable to participate in the imminent Passover meal, so they passed him over to Pilate with a demand that he have him executed.  “What is the charge?” asks Pilate.  They do not state the charge.  They just say that he is a criminal.  Pilate is irritated and tells them to try him themselves.  They make clear that they want to execute Jesus, but it is against Roman law for them to do it.   Pilate then asks Jesus if he is the King of the Jews – a slightly strange question in the circumstances – and Jesus responds somewhat enigmatically “Are those your words, or did someone else suggest them?”   Pilate makes clear that he doesn’t really understand all this internal Jewish squabbling and asks him what he has done to cause such annoyance.  If Jesus were to answer, “Well, I am the Messiah” as he did to the Jewish leaders who had questioned him, Pilate would have been no clearer, and if he had said that he was a king, Pilate would have understood it as a political statement.  So, Jesus explains that his authority and kingdom is not earthly and that his task is to bear witness to the truth.  This is in the realm of mystery as far as Pilate is concerned.  “What is truth?” he exclaims.  He is however clear, that there is nothing in what Jesus has said that warrants his execution under Roman law.

It seems to me that the importance of this interchange between Jesus and Pilate is that the notion of the Kingship of Christ needs to be understood in a way that is wholly different from that of earthly political kingship.   The term ‘king’ is Pilate’s description, not the one that Jesus adopts.  His response is, “My task is to bear witness to the truth.  For this was I born; for this I came into the world and all who are not deaf to truth listen to my voice.”

Just as the book of Daniel and the Revelation of John on the isle of Patmos seem less clear the more we read of their visions and dreams, so there is an element of mystery about Jesus and his mission.  He is not the king of a worldly polity.  He is not the usual religious leader.  But he does present himself as the Lord of our lives if we listen to the truth that he brings and follow him, and he proclaims the Kingdom of God, its immanence, and its transcendence.

Pilate did not understand Jesus.  The disciples did not understand Jesus.  In all the Gospel accounts we read that they did not understand his sayings, the stories he told, and the signs he gave them.  It often seems to me that the same has been true of the church down the years and as today we acknowledge Christ the King, we need to be more than a little careful that we do not think of him as one with the trappings of a worldly kingdom.   He came to bear witness of the truth.   A truth that he did not choose to describe in a systematic theology, but in stories we call parables.  He did not call on us to build him a royal palace, or even a religious temple or church constructed of physical stones, but of living stones – people.  He did not set down a royal constitution or a code of regulations, instead he came to bear witness to the truth, and to bring a Gospel of Love – better relationships with others and with the God that we must worship ‘in spirit and in truth’.